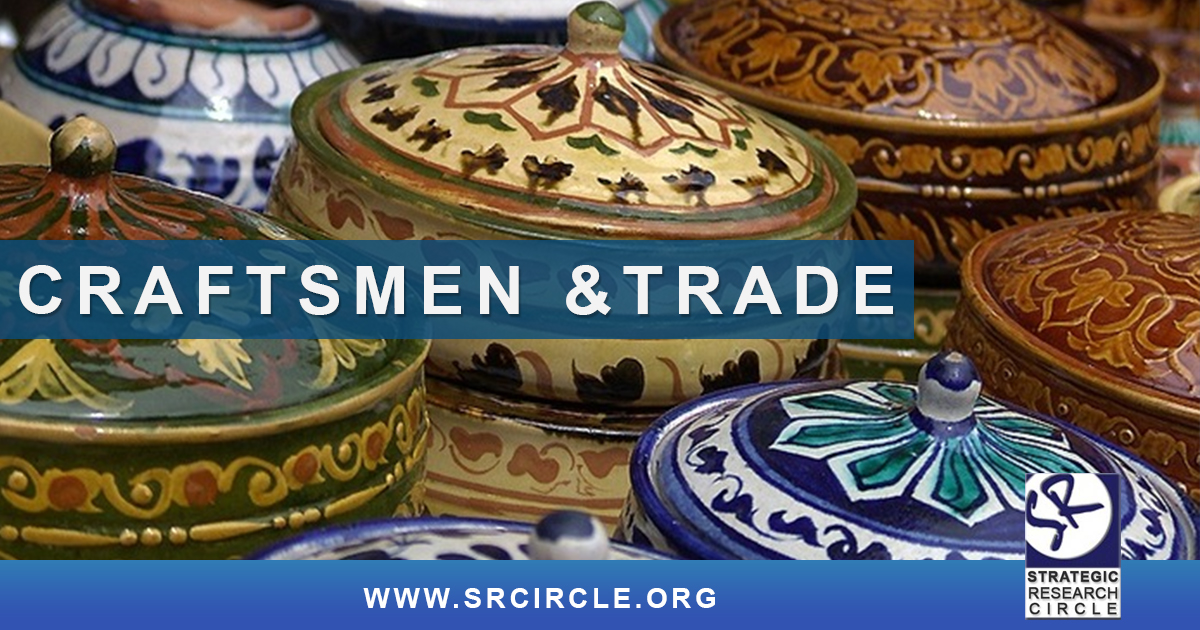 Writings of scholars, manuals and guides (hisba) for market inspectors, and travel records provided much of the information about merchants, legal documents, markets, trading routes  and commodities in Muslim middle ages.

Goitein mentions 256 manufacturing trades between 11th and 13th centuries. He mentions that  there was high degree of specialization and division of labor in medieval Islamic Cities. There were 450 unique occupations that included commerce, banking, and professional services

Technology of soap-making in Muslim Spain and Syria was based on recipes. Seller or manufacturer of soap was called Sabban

There were two levels of labor division in construction; one was manufacturing building material, other was involved in actual construction work

The common building method used was ashlar masonry in Syria that required highly skilled labor in stone cutting. Other was the use of rubble stone and third involved baked bricks. Ventilating devices built on roofs of the houses in Cairo showed level of knowledge and sophistication of the construction workers

Wide variety of dyes, spices, aromatic products, woven textiles, gems, ceramics, and flax (linseed) were important from the East while olive oil, leathers, dried fruits were among the exports of Muslim Spain.

Craftsmen were the most employed class of people. A good artesian was never out of work

In a letter from Busir in Egypt, employers engaged in making of flax and hemp, tried to take away each other’s workers. Craftsmen from Persia and Syria helped the growth of Spanish silk industry.

“The daily baking and distribution of the bread needed to supply the demand in the towns, was organized in occupational units, each combining seven or eight different tradesmen, all working concurrently, but on different stages of the process. They were the wazzan who weighed grain and dough, the sammad, sifter of wheat and flour; the adjdjan, dough-maker, farran an oven keeper, wakkaf who attended the oven, raffad who put loaves in the oven and djallas who sold the bread. The entire group was paid and managed by the khabbaz” Labour in the medieval Islamic world By Maya Shatzmiller