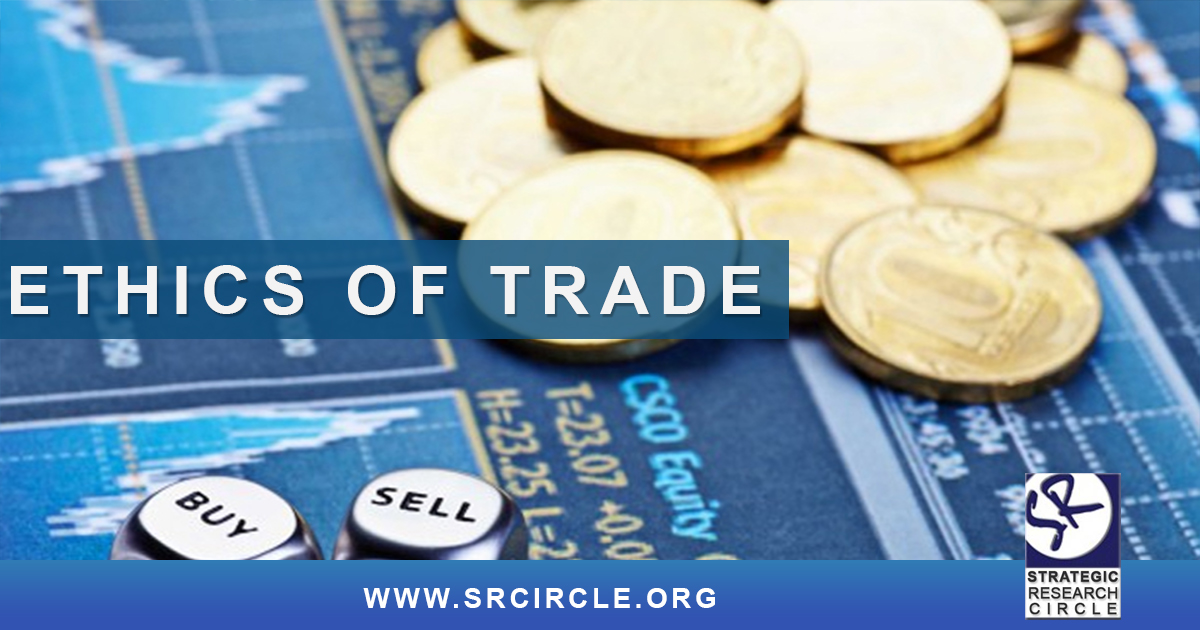 Economists see relation between corruption and reduction in investment. Al Dimashqi (1256-1327) provided detailed commentary on dangers of fraud, waste, appointment of agents, obtaining of information about market prices, the fixing of prices, delivery of goods, financial and commercial administration. Like Ghazali, Al Dimashqi considers an ideal merchant is the one who fears God and observes equity in his dealings, buys and sells on easy terms, carries goods for need of the people, and is satisfied with small profit


Ease in Buying and Selling

Islam has special admiration for easy purchaser (in bargaining), an easy vendor (in selling), an easy debtor (in repaying the debts) and easy creditor (in lending and demanding back the loans). Though bargaining and haggling for prices is unavoidable in business, sellers are recommended to mix sale with charitable gift(s)

“May God’s mercy be on him who is lenient in his buying, selling, and demanding back his money (or debt) “ Al Bukhari

The Prophet(s) owed somebody a camel of a certain age. When he came to demand it back, the Prophet said (to some people), "Give him (his due)." When the people searched for a camel of that age, they found none, but found a camel one year older. The Prophet said, "Give (it to) him." On that, the man remarked, "You have given me my right in full. May Allah give you in full." The Prophet said, "The best amongst you is the one who pays the rights of others generously."

Qualities of a Good Merchant

Al Ghazali, Al Dimashqi  and Ibn Khaldun wrote extensively about ethics of trade. Al Ghazali, in his Ihya Ulum al Din lays down principles for Muslim merchant involved in trade. A merchant should:

1. Begin his transactions with good intention

2. Consider trade as a social duty

3. Not to be the first to enter and last to leave the market

4. Avoid forbidden and all doubtful and suspicious trades

5. Carefully watch his words and acts in trades

1. Lineage or reputation of the family religious values, knowledge and experience

3. Generosity and readiness to apply oneself for public welfare

Reported by Tirmidhee in Ibn Majah  “The truthful merchant  on the day of Resurrection together with the Prophet, the truthful ones, the martyrs and the pious people”

Umar Ibn Khattab said. "There is no place where I would be more gladly overtaken by death than in the market-place, buying and selling for my family. He sets honesty in the commercial life, above the punctual fulfillment of religious duties, as test of the worth and excellence of a man.

Umar once asked a witness to bring someone who knows him. The witness brought forward a man who would vouch for his character. Umar asked. Are you his near neighbor? Do you know his going out and coming ins? No, he replied. Then Umar asked have you been his companion in journey so as to have had opportunity to know his character?. The answer was No. Then Umar asked, have you done business with him, for it is when money passes from hand to hand that a true piety of a man is revealed. Again the answer was no. Then I presume you have seen him standing in the mosque, repeating the Quran and bowing down in prayer. This time the answer was yes. Where upon Umar drove the man away saying you know him not. Turning to the witness he said. Bring me a man who really knows you for trading is the true test of a man and it is in the operation of trade that his piety and religious worth becomes known.

According in Ibn Khaldun, traders with less influence should have some courage to resist corruptions of those in power and fight greed within their peers. Traders should also show humility in the best interest of their business.

Car dealers sometimes use deceptive advertisement to lure customer to their showroom. When buyer arrives, he is informed that the car he is looking for is sold out. So the buyer is urged to take another model that is higher in price

Al Ghazali considered the trade (Tijara) as a form of Jihad (struggle). He added that seller give emphasis to quality and quantity of the commodities and must quote the correct price of the goods.

“There must be absolutely no fraud in the pricing of the goods. And the correct price must not be hidden… A seller say that he could not get a higher than prevailing price from some innocent traveler;  this would be wrong and sinful… Al Ghazali

“It will be most sinful if one tries to profit by bidding up the price of something with “planted” buyers” Al Ghazali, Kimiya, 356 – 7

Buyer and the sellers are required to describe the defects along with the qualities. If they told lies and hid something, then the blessing of the transaction is lost

“Give full measure whenever you measure, and weigh with the true balance; this will be for your own good, and best in the end” Quran 17:35

The messenger of Allah passed by a heap of foodstuffs. He thrusts his hand into it, and his fingers encounter dampness. He said what is this O owner of the foodstuff. He said, rain has stricken it O messenger  of God. He said. “ Why don’t you not put it on top of the foodstuff so that people may see it. He who deceives is not of me”

If a corporate director buys company stocks using inside confidential information, before its shares are expected to go up, it’s considered “Insider Trading”

“Do not meet al-jalab (those who drive animals from one place to another for sale) outside the town. The master of one who is met, and is purchased from, has an option when he comes to the market”

In commodity business, the speculation shifts the risk from the producer to the buyer. It is also designed to keep the commodity prices steady regardless of the yield. However, in Islam, it’s prohibited to sell crops of fruits before its harvest.

Allah s Apostle forbade the selling of fruits until they were ripe. The Prophet (s) added, "It means that they become red”.

There were evidences of few contracts in Greco-Roman history. However, emergence of contracts in trade during in the middle-ages is quite clear. You can see them in legal Muslim texts of 8th century, in Geniza records of 11th century, and in Venice during later centuries.

“Fulfill every pledge (ahd) – for verily (on Judgment Day)the pledge will be inquired into" Quran 17:34

Barter trade may help avoid transactional cost and even taxes, it is discouraged in Islam